HISTORY OF THE SCHOOL 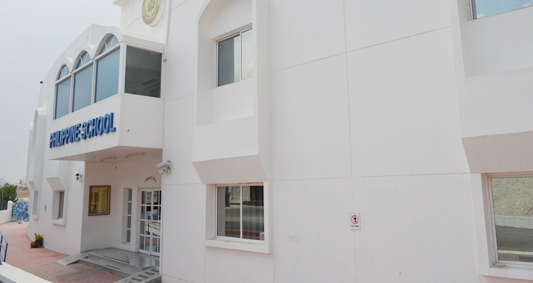 The Philippine School was conceived in 1989 by the Filipino Overseas Workers through the auspices and support of the Philippine Honorary Consul General his Excellency Essa bin Mohammed Al Zedjali in cooperation with the Overseas Workers Welfare Administration (OWWA) and the Department of Labor and Employment (DOLE).

The first site was at Al Wattayah where it was inaugurated on 2nd February 1990. It was then called Philippine Community School (PCS).

On 17th February 1990, the school formally opened its portals to 38 students under multi-level classes handled by volunteer teachers. In June of the same year, the hired principal (Ms. Elenita Fernandez) arrived. Ms. Isabelita E. Malong, Ms. Carmelita B. De Jesus, and Ms. Fe Edithaldine T. Vendiola, the first batch of school elementary teachers came from the Philippines before the end of the year. It was then that the school offered the Pre-Elementary Level (Nursery, Kindergarten, Preparatory) and Elementary Level (Grades 1 – 6).

The first batch of graduates was the preparatory pupils handled by the school principal. In September 1991, the Pre-school teacher, Mrs. Rosario G. Ballesteros, arrived. On October 16, 1991 the School was recognized as a learning institution by the then Ministry of Education and Youth, Sultanate of Oman. It was able to produce its first set of Grade Six graduates, school year 1990-1991.

The school transferred to a new and bigger site in Al Khuwair during its third year of operation, SY 1992-1993. It opened its secondary level with six First year High School enrollees. The first batch of High School Teachers, Dr. Dionisio Viloria, Mrs. Erlinda M. Valientes, and Mr. Enrique B. Pontillas along with elementary school teacher Ms. Anette Imperial came. It was towards the end of the same school year when the grade six graduating pupils composed their graduation song under the tutelage of Miss Fe Edithaldine T. Vendiola. It became the PCS Alma Mater Song the following year 1994. Then again the school transferred to another location in Ruwi, in order to accommodate the growing population. Four additional teachers were hired for school year 1993-1994.

Having maintained the prescribed standards of instruction and having complied with the rules and regulations set by DECS, and in consonance with the policies for international schools by Ministry of Education in Oman, PCS gained its Government Recognition (No. 02, s. 1995) on 31st January 1995 under its new name, PHILIPPINE SCHOOL (PS). This recognition grants PS not only to offer pre-elementary and elementary but also secondary courses. Since then the PS has been operating in accordance with the laws of the Republic of the Philippines, particularly along organization, administration, and supervision for private educational institution; likewise, with the Ministerial Decree No. 4/2006 of the Sultanate of Oman. At the end of school year 1994-1995, nineteen (19) elementary pupils and the first batch of six (6) high school students graduated.

A better building at Madinat Qaboos became the next home of PS in the school year 1995-1996. New teachers joined the teaching force. It was on April 21, 1996 when the Pledge of Loyalty was written by Miss Fe Edithaldine T. Vendiola. Four additional teachers were hired in the school year 1996-1997 in response to the need of the school with the continuous increase in student population.

The school went back to Al Khuwair with an annex compound at the start of 2000 with twenty-three (23) able and dedicated teachers and personnel.

In 2001-2002, Philippine School was relocated to a bigger and more presentable villa at Al Khuwair 33. Both the main and the annex are occupying two separate villas in the same site, the Pre-Elementary and Elementary Department in one villa and High school at the other villa.

In April 2005, the Board of Directors 2004-2006 initiated the acquisition of the new PS site at Al Khuwair Heights. The following year, a ground breaking ceremony took place and the construction of the new building started immediately. The transfer of the new school to the new site was facilitated by the Board of Directors 2006-2008 along with the opening of classes in June 2007. The new school building was inaugurated on the 16th of June 2007 by His Excellency Acmad D. Omar, Philippine Ambassador to the Sultanate of Oman. From its humble beginnings, PS evolved from a simple academic institution into a highly-structured organization having more than 700 students, 31 highly qualified and committed teaching staff, and nine (9) hardworking personnel.